Government School for the Blind

The school came into force on 20th September, 1968. Shri. Sunil Kr. Pal was the first Governing-Officer of the school. He started educating with only five students on the onset. Practically education started smoothly from January 1970 onwards.

Shri. Debabrata Bandyopadhyay, then Minister of Jail & Social Welfare, officially inaugurated the students hostel/ residential campus on 5th July, 1986. He developed an expert-committee for the upliftment of the school. As prescribed by that committee the post of the Governing Officer was abolished; instead the post of Principal was created who would also be the D.D.O. & Head of the Office. Posts for five expert teachers, two craft-teachers, one music-teacher, two livestock & farm-teachers and four additional staffs were sanctioned. Arrangements for a total of hundred (75) residential students were also sanctioned.

EDUCATION FOR THE BLIND

EDUCATION FOR THE BLIND 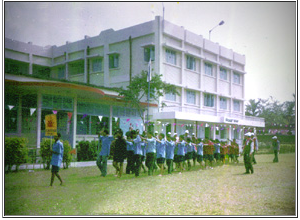 Government School for the Blind

Asha deepa school for the blind..

The deepa academy for the differently abled..

Mathru educational trust for the blind..