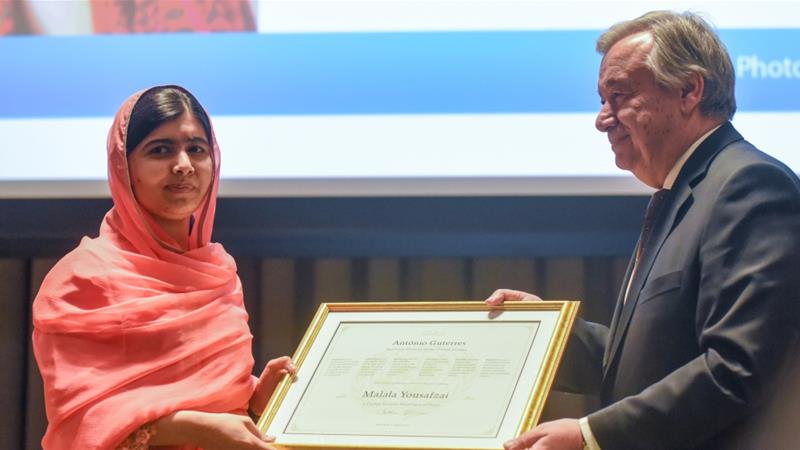 Nobel Peace Prize winner Malala Yousafzai has been named the youngest ever UN Messenger of Peace, with a special focus on girls' education.

The 19-year-old Pakistani activist became known around the world after she was shot in the head and neck by the Taliban on her way home from school in 2012. She narrowly escaped death and, since her recovery, has continued campaigning for the rights of girls around the world to access education.

"I stood here on this stage almost three and a half years ago ... and I told the world that education is the basic human right of every girl," she said in her acceptance speech. "And I stand here again today and say the same thing. Once you educate girls, you change the whole community, you change the whole society.

She also called on other girls from her home country to make their voices heard.

"You need to stand up ... you need to believe in yourselves," she told them. "You are the real change-makers. If you do not stand up, change will not come ... It starts with us and it should start now."

In a heartfelt speech, Guterres described Yousafzai as a "hero" and "the symbol of one of the most important causes in the world."

"It is an enormous pleasure to have you as our Messenger of Peace," he said, praising her "courageous defense of the rights of all people, including women and girls, to education and equality" and her "unwavering commitment to peace."

UN Messengers of Peace are chosen from the fields of literature, art, science, entertainment, sports and other areas of public life. Their role is to help focus global attention on the work and ideals of the United Nations.

Other Messengers of Peace include Leonardo DiCaprio, chosen for his work on climate change and other environmental issues, and Stevie Wonder, a committed campaigner for the rights of persons with disabilities.