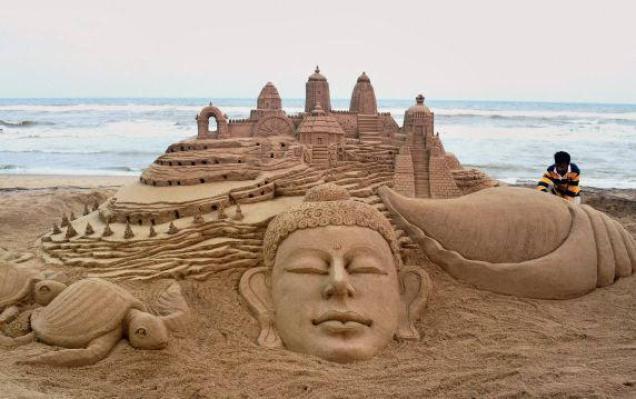 Indira Gandhi National Open University (IGNOU) has decided to launch a certificate course on sand art as a first of its kind in the country in a bid to popularise the art form.

Internationally-acclaimed sand artist Sudarsan Patnaik, who is all set to help in designing and developing the unique course, said it would be provided through the Massive Online Open Course (MOOC) programme of the University.

He said the decision to introduce the course was revealed by IGNOU’s vice-chancellor Prof Ravindra Kumar at the East Zone Regional Directors’ Meet held here on Friday.

The course to be offered on the University’s online platform would initially be available at Bhubaneswar region as this year’s enrolment of eastern zone was around 25 per cent of the total enrolment of IGNOU, the V-C said.

IGNOU would later introduce the course in other centres, he said, adding, the programme was expected to be launched within three months.

The process of sculpture making on sand by Sudarsan Patnaik at sea beach would be video recorded and circulated online, he said. The programme would also be offered on the government’s own Internet platform called ‘Swayam’.